The gastronomy of the Camino de Santiago and its typical dishes

If you like gastronomy, the Camino de Santiago and its surroundings have a great variety of traditional cuisine that enters through the eyes and that conquers the palate. These are our 9 recommendations of dishes that you should not miss. 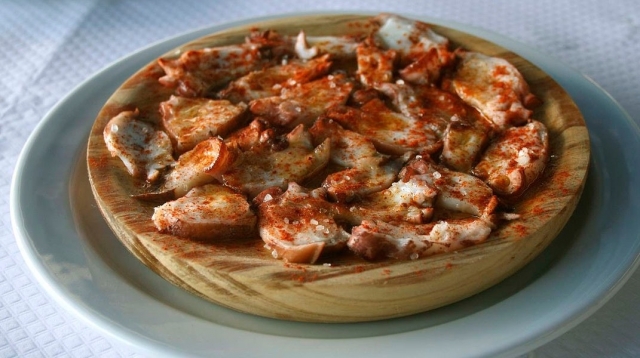 The gastronomy of the French Way of Saint James

One of the greatest stimuli that any pilgrim can find is, without any doubt, the rich and varied Spanish cuisine. More specifically, if we walk the different stages of the French Way, we will come into contact with an incomparable gastronomy and with a large number of typical products from the north of the Iberian Peninsula as well as from autonomous communities such as Navarre, La Rioja, Castile and Leon or Galicia.

At the end of each stage, pilgrims have the opportunity to discover a large number of typical dishes of each locality, region or region through which they pass. You can taste traditional stews that have been with us for generations (and still survive), the best seafood, rich homemade desserts, meat of the highest quality ... The environment of the Camino de Santiago has much to offer, beyond hundreds of kilometers of trails and spectacular views.

If your plans include walking the French Way or enjoying the Camino de Santiago from home, don't forget to make a list of all these typical dishes and try them when you have the chance. You won't regret it!

What typical dishes of the Camino de Santiago should you try?

The typical cuisine of regions such as Navarra or Galicia, to name a few, is so wide that trying to condense it in just a few recommendations is impossible. Personal tastes, of course, also come into play. That is why this list is simply a "starting guide" of some dishes that pilgrims should not miss on their journey to Santiago, although there are undoubtedly many more that are worthwhile.

Although its origin is not very clear, it is related to the figure of the muleteers, old travelers in charge of transporting goods through the territory. Cod with ajoarriero is a traditional hot dish from the center-north of the peninsula, very typical in areas such as Navarra, Aragón or León, to mention a few. Its main ingredients are cod, green and red bell pepper, garlic, onion, tomato, olive oil and salt. However, there are different ways of preparing it (Navarrese style, Manchego style...), depending on the place we visit.

How to prepare Cod with ajoarriero?

Another of the most potent dishes on our list of recommendations is potatoes Rioja style. This is a first course or unique dish of great flavor that was already taken by the farm laborers and that simply consists of a stew of potatoes cooked with sausage, onion, garlic and peppers. Its preparation is really simple, but the final result requires good quality ingredients.

How to prepare Potatoes Rioja style?

Garlic soup, also known as Castilian soup, is a typical Castilian-Leonese dish, of humble origin and whose ingredients may vary according to the cook. It consists of a soup made of water or broth, bread, garlic, olive oil, bay leaf, sweet paprika, salt, pepper and poached egg, although some people add ham or chorizo. With common and cheap ingredients, it is one of the great wonders of "Spanish poor food" and one of the typical dishes that you will find along the pilgrimage route to Santiago de Compostela.

How to prepare Garlic soup?

Prepared in wood-fired ovens in specialized rotisseries, roast lamb is one of the most popular traditional dishes of Castilla y León. Served in clay pots, the difference with roast lamb is that the suckling lamb comes from a lamb not yet weaned, being its preparation an art in the kitchen.

How to prepare Roast suckling lamb?

Similar to cocido madrileño or cocido lebaniego, cocido maragato is one of the most traditional hot dishes from the province of León, coming from the Maragatería region. It is a stew of the people of the countryside, a strong dish to give energy for a whole day's work. It consists of a soup with chickpeas, cabbage and various types of beef or pork, being one of its peculiarities that it is served the other way around than other stews: first the meat, then the chickpeas and finally, the soup.

How to prepare cocido maragato?

The octopus a feira is perhaps the most characteristic dish of all Galician cuisine along with the traditional empanada, very popular in festivals or fairs, where it is served as a tapa. It consists of a whole octopus cooked to soften its tough flesh and served in slices, accompanied by olive oil, coarse salt and paprika. Although traditionally we associate the "octopus a la gallega" with sliced potatoes, the truth is that this custom is more typical of the rest of Spain than of Galicia.

How to prepare octopus a feira?

Galician broth is one of the best known dishes in Galician gastronomy and at the same time one of the simplest and healthiest. It consists of a soup of cooked vegetables, such as turnip greens, cabbage, cabbage, potatoes or beans to which pork fat is added (also bacon or chorizo) to give it its particular flavor. The truth is that there are many variants of the Galician broth, all of them suitable to warm the pilgrim after a hard day of Camino.

How to prepare galician broth?

It is almost obligatory to try the tarta de Santiago when arriving in the city of the Apostle, a legendary dessert that can be found in almost all traditional pastry shops (not only in Galicia, but also in many other places along the Camino de Santiago). The tart of Santiago, by definition one of the typical dishes of the Camino de Santiago, has almonds, egg, sugar, lemon zest and butter.

This is another great and typical dessert of Galician cuisine, very similar to French crepes. The filloas are traditional from the carnival season, usually filled with sweet, although originally they included blood from the slaughter. Among its ingredients, you can find egg, flour or oil and they are usually made with both stew broth and milk.