The miracle of the rooster and the hen, one of the most famous legends of the Camino

Have you ever heard in your pilgrimage, the proverb "in Santo Domingo de la Calzada, where the hen sang after being roasted"? 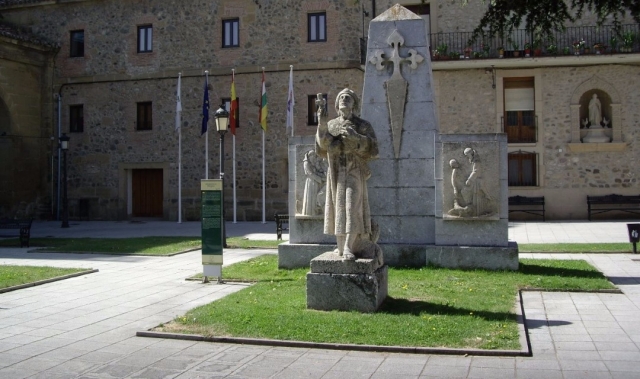 If we talk about legends in the Camino de Santiago, we must make a very special place to "the miracle of the rooster and the hen", one of the best-known stories in the pilgrimage route and in La Rioja. This legend takes place in a magnificent place while magical, one of those places that pilgrims know and those who are not easily forgotten, the town of Santo Domingo de la Calzada, situated on the banks of the river Oja. So important is the legend for this town, which is of cultural interest by the Government of La Rioja. In fact, due to the legend, in the cathedral  there is always a live rooster and a hen.

Have you ever heard in your pilgrimage, the proverb "in Santo Domingo de la Calzada, where the hen sang after being? This proverb is directly related to the story or legend that we will tell you below. Of course, as most legends, these stories have some real part, a base from which all the fantastic part is built and probably religious of the story.

The miracle of rooster and hen

The story tells that during the fourteenth century, when the Camino de Santiago was not yet recognized as such today, a small German family wanted pilgrimage to Santiago de Compostela. The family was composed by only three persons: father, mother and son, Hugonell. Age is unclear, but apparently would be around the age of majority, 18 years.

The young German, and his parents arrived at a village inn where they stayed for the night. At the inn served a young woman who fell in love with Hugonell as soon as she saw him ... However, the German guy did not want to please the wishes of the girl, and decides to reject her that night. She could not bear the shame and want revenge, so she decides to accuse Hugonell of a crime.

She hid a silver cup on young German's pocket and later accused him of robbery. When the young parents decide to leave the next morning, on his way to Santiago de Compostela, authorities arise because of the complaint of the girl. These members of the Justice review the pocket of the young German, finding in it the silver cup.

There was only one punishment for thieves of the time; he was  condemned to the gallows, one of the many ways of implementing the death penalty in the fourteenth century. Parents, not knowing what to do for your son, decide to pray to Santiago; the saint not let them down. The punishment imposed for justice was fulfilled and the young boy was hanged. However, when parents approach the lifeless body of his son, Hugonell speaks to them and tells them that has been saved from death by the grace of the Holy.

The miracle of rooster and hen

Parents did not hesitate to rush to tell the whole story to the magistrate, who at that time was enjoying dinner with a good plate of poultry. A magistrate in the Middle Ages was a royal official dedicated to various aspects, including making the role of judge in first or second instance. They were, in all aspects, governors with judicial powers, military, commercial, etc.

You can imagine what happened ... the magistrate thought that the German couple was teasing him, and mocked them ensuring that their son had as much life as the rooster and the hen he was about to eat. It is at that moment when the two poultry dish jumped from the dish in spite of had been cooked. Faced with the evidence, and despite being touted in his dinner, the magistrate had to heed the requests of the German family.

There are few who associate this legend with the known as "El Gallo de Barcelos" and probably they have the same origin. But that, friends, is another story ...