What to see in Saint-Jean-Pied-de-Port 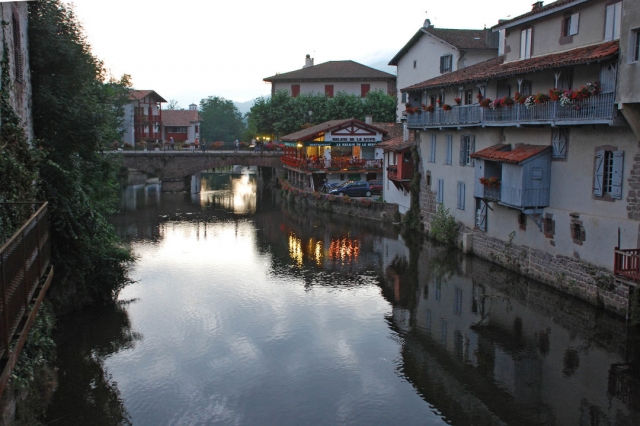 Pilgrims who come to this enclave from the former village of Saint Jean Le Vieux will access the centre through the street Calle Chemin de St-Jacques, the road that connects to the historic street Rue de la Citadelle via the Puerta de Santiago.

Located at the highest part of the centre, its name derives from its historic past as being the ancient route used by pilgrims to reach the historical centre and continue their journey to Roncesvalles. (It was declared a World Heritage Site by Unesco in 1998.) In the Middle Ages travellers had to pay, at this point on the route, a toll in order to continue the way.

There are writings that recall how they suffered punishments if resisted, as was described by the monk Aimery Picaud in the Codex Calixtino: The toll collectors are so evil they deserve the utmost condemnation, because, armed with two or three clubs, they stop the pilgrims in their tracks and forcibly demand unfair taxes. And if any hiker refuses to pay the money they ask, they are hit with sticks and amid threats, searched down to their underwear and have their documents removed.

Chapter VII of Book V of the Codex Calixtino Walkers leave, on the left hand side, the fortified Citadel, a construction that stands on the summit of the hill of Mendiguren, 70 meters in height and situated in the same place that was once occupied by a medieval castle.

The earliest buildings date back to 1625 although, the area was renovated in the late XVII century following the instructions of the military engineer Vauban, well known in France for being the author of important military works in the country. From this building there are privileged views of the stronghold and, of the city and the nearby ports of Cize, a visit is highly recommended.

But the historical route does not lead directly to this military compound but, rather it continues on a gentle descent down the steep and cobbled Rue de la Citadelle, which still retains its medieval past and where the majority of services for pilgrims are concentrated. The facades of the buildings here are of typical Basque architecture and, are notable for the reddish sandstone with which they were built, a material obtained from Mount Arradoy.

Pilgrims can see how on some of these houses the name of its first inhabitants can be read, and even the profession in which they were engaged and the year that the building was constructed.

One of the best examples is known as Arcanzola House, located at number 32. Built in the year 1510, it was the birthplace of the Blessed Juan of Mayorga, a Jesuit martyr against the Canary Islands. A little before here, and at the other side of the road stands the information point for pilgrims and next to it, one of the most unique and emblematic constructions of this town. The Cárcel de los Obispos (Prison of Bishops-number 41), its name refers to two different periods.

On the one hand, to the presence within of the bishops of the diocese of Bayonne between the late XIV and early XV century-Saint Jean was an episcopal residence of the Pope of Avignon during the Great Schism of the West, and, secondly, to the buildings function as a prison at the end of the XVIII century.

Pilgrims can still see some of the cells and visit, in a large hall, the exhibition El Gran Camino (The Great Way): evocation of the Caminos of Santiago in the Middle Ages, which includes educational panels, reproductions of clothing and antique items. This "prison" is open every day, except on Tuesdays, from April 3rd to November the 1st. Open from 11.00 to 12.30 and from 14.30 to 18.30 hours. Throughout July and August it opens every day from 10.30 to 19.00 hours continuously.

On reaching the lower area of ​Rue de la Citadelle pilgrims are situated before the church Notre-Dame du Bout du Pont, a temple which, as its name suggests is next to the medieval bridge over the river Nive. Today it is known as the Iglesia de la Asunción (Assumption Church). Apart from the Cathedral of Bayona it is the most notable Gothic building in the French Basque Country.

History attributes its construction to the king of Navarre, Sancho El Fuerte, in memory of the victory against the Muslim army in the battle of Navas de Tolosa, which took place in 1212. The origin of this temple can be traced back, therefore, to the thirteenth century. With its reddish façade, inside it contains elegant columns and a large nave with two side aisles and two choir areas. Its construction is based on red stone pillars and columns. The adjacent building was once the pilgrim hospital of Sainte-Marie.

Beside the temple stands the Puerta de Notre-Dame, through which pilgrims entre the Vieux Pont, the old bridge that crosses the river Nive and from which there are beautiful views of the adjoining houses bathed by the river.   But before continuing the official route, which crosses the river via the bridge, pilgrims can turn right and onto the Rue de l'eglise that will lead them to the Puerta de Navarra, built into the medieval wall and that retains its original features, with a beautiful arch and a pointed vault. This door leads to the square where, previously and for centuries a medieval market was situated.

From this point, moreover, walkers can access the Camino de Ronda, a walkway along the medieval city walls, built between the XV and XVIII centuries, with its view holes, watchtowers and battlements, which will take them back to the Puerta de Santiago.

Back on the pilgrim route, Walkers cross the river Nive over the bridge and continue through the area of Rue d'Espagne, name so because it approaches the boarder. This district, which was fortified in the middle Ages, was home to the artisans of the enclave, as is highlighted by some of the lintels above the doors which give information regarding the initial homeowner.

At number 9, a curious inscription recalls the high price of wheat in 1789. On the same street visitors will also find the Casa de los Estados de Navarra (The house of the States of Navarra), built in 1610. It was in this house where the states of Navarra united, a body similar to the General states of the Kingdom. At the end of the street and, now on a slight ascent, pilgrims should pass the last gate, the gate known as Puerta de España (the door to Spain); it forms part of the new fortification and was constructed in 1840. After passing it, the pilgrims begin their long climb to Roncesvalles.

Off the Jacobean route is the town hall, located in Place Charles de Gaulle, 13, also known as the Market Square, where they host, on Mondays a weekly market. The council has occupied, since 1935 the building known as Casa Mansart (XVIII century) with its beautiful facade, its name comes from the lofts and attics (mansardes in French) that crown its roof. Walkers can also follow a quiet and relaxing walk along the Nive that will lead them to the plaza de Eyheraberry (in Basque it means new mill), an outdoor theatre with historical significance, it was here that during the French Revolution different patriotic celebrations took place.

A new bridge now crosses the river Nive. What to do in the surrounding area Although the pilgrims who pass through Saint Jean Pied de Port normally use their free time to rest, bearing in mind the complicated and imminent climb, this area, located in the French Basque country offers visitors the possibility to enjoy its traditions and diverse tourist attractions. Thus, for example, on the left of the Rue d'Espagne the frontón municipal (municipal sports ground) is situated where pilgrims can watch a game of pelota vasca.

Both in winter and in summer there is a game every Monday. During festivity times, on Mondays there are specialty games of handball, on Wednesdays of Jai Alai (net point) and on Fridays a match of chistera. The various grottos and caves that characterize this area of ​​southern France-, and which they have in Les Grottes de Sare (situated 50 km from Saint-Jean-Pied-de-Port) one of the best examples–here visitors can enjoy their leisure time in this quiet village. An instructor/guide offers the ability to visit the caverns or go down a canyon. For more information http://www.alexispeleo.com/

Points of interest of Saint-Jean-Pied-de-Port (3) 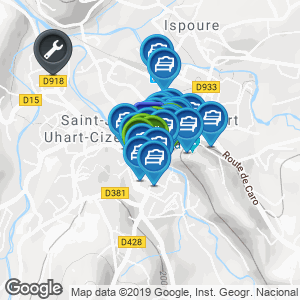