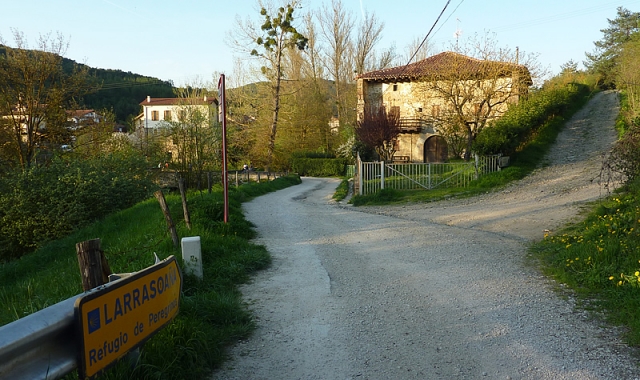 At this stage the route runs alongside the river Arda, following it closely from Zubiri until reaching the doors of Pamplona. After the two previous demanding routes, this day is a welcome break and time to enjoy the journey to Santiago. For the first time the Camino stops in a big city: Pamplona. Among other things it is famed for being the world capital of festivity.

After crossing the bridge, Puente de Rabia to the left side onto the bank of the river Arga, the pilgrim soon comes to a small ledge next to an urban area. There is tiny square with a fountain offering fresh water to the pilgrims. The path continues downhill, on this occasion along a narrow and irregular path, although not as steep as previous ones. After a stretch on the road (there is not much traffic, however extra caution should be taken), a great monstrosity can be seen and heard. The Magna company which has been exploiting the rich deposits of magnetite from the area. Some neighbours complain about pollution, while for other families it is the main source of income. Controversy aside, the attack on the Camino of Santiago is unquestionable. Besides the noise, smell and being visual ugly, in certain areas along the route pedestrians are required to wear a helmet.

After the chaos peace is returned. Along the riverbank of Arga, in the shelter of a line of beech trees that follow the route to the tiny villages of Illaratz and Eskirotz.

Small stretches of cement; dirt tracks, paving stones and gravel, along the banks of Arga take pilgrims to the gates of Larrasoaña. The Camino of Santiago does not actually go through Larrasoaña as it lies at the other side of the river. However, it is worth crossing the Los Bandidos bridge (The Bandits bridge), (which according to chronicles from that era, was once a focal point for all kinds of criminals and delinquents in the XIV century), to have a quiet and safe stroll in this traditional pilgrim area. 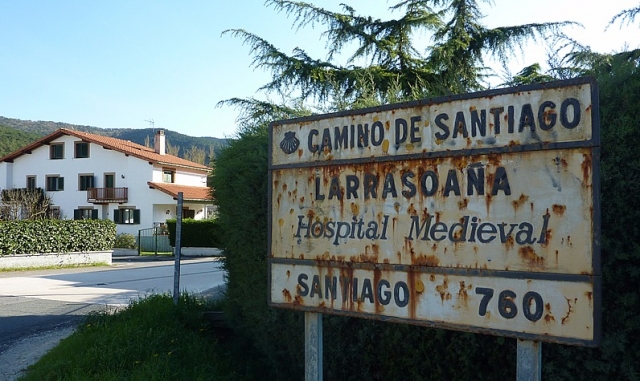 On the way out of Larrasoaña you have to take a short climb up a gravel track to the hamlet of Akerreta, which has a lovely hotel. The exit path from this small hamlet can become a little slippery in the rain. From here, the route to Zuriain is completed through a forest, dominated by oak trees that line its waterfront path. Away from the protection of vegetation, an uncomfortable stretch on the (N135) road follows, now at the other side of the river before reaching Irotz, a small town where you find El Horno de Irotz, a popular restaurant with a sensational terrace. In its day, Irotz had a pilgrim hospital. The building remains standing as the church of San Pedro.

Through the bridge of Iturgaiz

In Irotz you cross once again to the other side of the river Arga via the Romanesque bridge of Iturgaiz. The next town along the pilgrim route is Zabaldika, which has a fantastic picnic area, although it has the drawback of being so close to the road. At this point the pilgrim has two possible routes to choose from. A comfortable walk along the riverside, leading to Huarte, a town that forms part of the outskirts of Pamplona. The other option is to continue the original Camino of Santiago you take this path directly from the picnic area. Both paths join together a few kilometres further along. For the traditional Santiago way, you pass through Arleta and travel down until reaching Trinidad del Arre, without doubt one of the most spectacular points in this stage. From Trinidad de Arre to Pamplona you pass through Villava, famous worldwide as the birthplace of the cyclist Miguel Indurán. Villava, although somewhat absorbed by Pamplona, has all the necessary amenities, including a hostel for pilgrims.

The neighbouring municipality of Burlada, the next place on route, is not lacking in services either. From here you reach the capital Navarra via the Romanesque bridge of Magdalena. 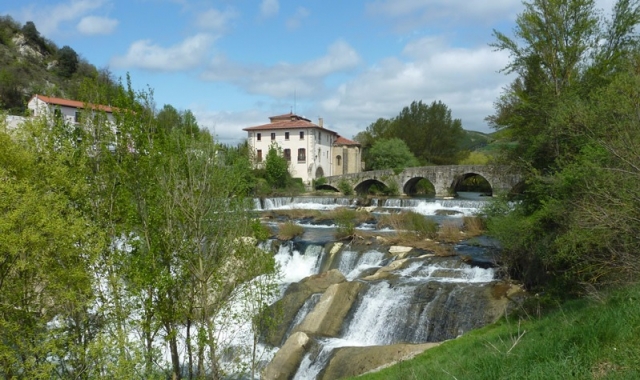 A comfortable route for cyclists, although, not at the start. Here it is possible to come across obstacles such as logs or branches. On arriving to Zabaldika you must choose between two possible routes. For cyclists the most comfortable passes through Huarte. However, any two-wheeled enthusiast should not miss out on the opportunity to visit Villava. 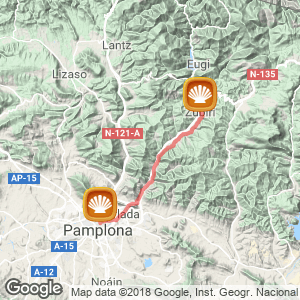