How to get to the starting point in the Camino de Santiago?

Connections to reach the main points of departure

28
How to get to the starting point in the Camino de Santiago? 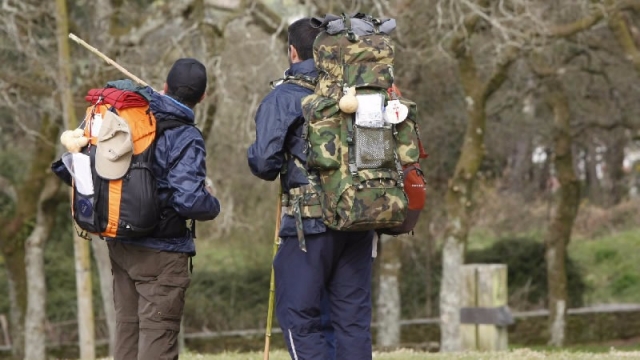 We bring you a Camino guide step by step with connections to reach the main starting points to start your pilgrimage route. We tell you what starting points are the most used by pilgrims every year and which should take into account depending on the time you have ahead to walk the Camino de Santiago.

One in five pilgrims who reach Santiago de Compostela begin their adventure in Sarria. This town of Lugo, on the French Camino is located just over 100 kilometres from the tomb of the Apostle, the minimum distance required to achieve the Compostela. For this reason it makes an ideal starting point for those who have little time to enjoy the way. Regardless of whether you have a personal vehicle or not, a good option to reach Sarria is by train, as it is well connected to Barcelona (with two services a day and tickets priced between 75 and 100 euros) and from Madrid (a train service runs every day, except on Saturdays, tickets are from 50 euros).

By bus, the most comfortable journey is via Lugo, with good connections to other Spanish cities. The bus trip from Madrid to Lugo costs less than 40 euros. From the bus station in Lugo there are daily services to Sarria, this journey costs less than 2 euros and takes about 30 minutes. For more information on how to get to Sarria.

The second most common starting point is Saint Jean Pied de Port, situated at the other side of the Pyrenees. Throughout 2012, 11.54% of the pilgrims to Santiago began their hike in the French town. The majesty and beauty of the landscapes of the Pyrenees, transmitted by word of mouth among pilgrims, has invited increasingly more pilgrims to start their way from this point. This growing demand has led to an increase in facilities and offers also transport services to reach Saint Jean Pied de Port have been strengthened over the years. At Easter and in the summer the company Conda charters two bus services daily from Pamplona (connect to the link on Pamplona). The journey takes just over an hour and the tickets 20 euros. This coach, full of pilgrims, also makes a stop at Roncesvalles. The rest of the year, the only possibility is to reach the town is via taxi from Valcarlos or Roncesvalles. From Pamplona there is a direct taxi service that costs 100 euros, a good option for small groups.

Another possibility to reach Saint Jean Pied de Port is by train, but this is not recommended for those travelling from Spanish territory. Biarritz Airport, located at 55 kilometres, is another possibility and more popular. The company Express Bourricot covers the journey from the airport terminal to Saint Jean for 72 euros.

Leon is the third most popular starting point for pilgrims (5.41 %). Being one of the larger Spanish capitals it is well connected with other major cities. By bus there are connections to Barcelona, Madrid, Bilbao, Seville, La Coruna…

By train, Leon also has a major railway station. It has two stations with rail connections to Madrid, Barcelona, Santiago de Compostela, A Coruña or Gijón. For more detailed information on how to get to Leon…

The small hamlet of O Cebreiro, first town of the French Way in Galicia, is one of the most bucolic enclaves along the route. There are many walkers (5.36 %) each year who decide to start their journey from this location. Apart from loosely covering the distance required for the Compostela, pilgrims avoid a demanding but beautiful ascent to Ancares. There are no public buses to O Cebreiro. Therefore, pilgrims who intend to start their journey from this point should travel to the neighbouring town of Pedradita, with better connections, and just over four kilometres away. Once in Pedradita they can ascend up to O Cebreiro on foot or in one of the three taxis that cover this route. To reach Pedradita the best option is by bus. The company Alsa has daily links with Madrid, Barcelona, Bilbao, Santiago and Lugo, among other towns. The company Gonzalez and Riva also have links to Pedrafita from Lugo and Ponferrada.

The fourth most common starting point is Roncesvalles (4.4%). The best option is to reach here by foot and with a backpack, from Saint Jean Pied de Port, but those who don’t have much time or prefer to avoid this Pyrenean stage have the option to start the Camino of Santiago from Roncesvalles. Autocares Artieda links Roncesvalles to Pamplona (how to get to Pamplona) with a daily service except for on Sundays and bank holidays. In summer this route is reinforced by the addition of another coach. The journey takes just over an hour and the ticket price is 6 euros. From Pamplona there is a direct taxi service that charges 60 euros.

The 4.03% of pilgrims who obtained the Compostela last year began the Camino of Santiago in Ponferrada. ALSA charters a bus daily service from Madrid (about 30 euros). Ponferrada also has good bus connections with Leon, (several daily services, costing around ten euros per journey). Santiago, Granada, Oviedo and La Coruna also have connections to Leon. By train Ponferrada is connected to Madrid, Santiago and Leon.

Mandy Ibbotson 18/07/17 16:07:37
12
I am thinking of starting from Terradillos De Los Templarios at the beginning of October. Do you see any problems for me? I will be travelling alone. Would it be better to start elsewhere? I am planning on walking about 18 days to Santiago de Compostela. Any ideas re safety, weather, terrain, places to stop etc would be gratefully accepted. Thanks in advance
1 2

If you are a good walker it would even possible to put the beggining at Burgos to arrive at Santiago in 18 days but it may be too tight.

Although it would be possible from Terradillos also, alternatively you would may starting at León or Astorga and walking to the "end of the known world" in the Middel Ages: Finisterre.

There are many possiblities.