What to see in Logroño 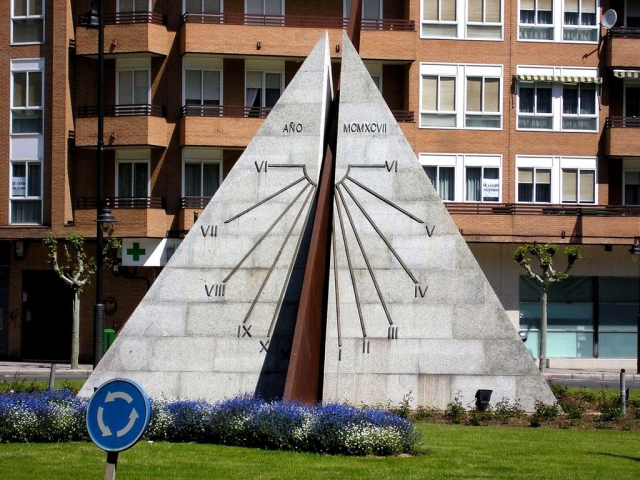 Pilgrims reach Logroño after leaving Mount Cantabria on the left hand side, a great viewpoint over the city, which was home to pre-Roman populations. The neighbourhood of San Antonio, and in particular, the road Mendavia serve as preludes to the capital of La Rioja, which is accessed via a Stone Bridge, one of the symbols of the enclave.

Before crossing the bridge hikers leave, on the right hand side the House of Science, former public slaughterhouse, and currently, a thematic centre with a number of examples. The Stone Bridge is one of the four bridges that span over the river Ebro to the city. Completed in 1884, it was built on a structure that previously existed and was known as San Juan de Ortega, a saint and constructor of the Camino who also dedicated a chapel that existed on the left side. It is believed that this disciple of Santo Domingo de la Calzada constructed the original bridge. Now at the other side the pilgrimage route continues along calle Ruavieja, the oldest street according to official records of Logroño, which explains, step by step, the importance the city had and still has the French Way. Yellow signs, located on the cobbles, guide the pilgrims along this route.

The first stop on the street is at the chapel of San Gregorio - this saint, bishop of Ostia, had as disciples, Santo Domingo de la Calzada and San Juan de Ortega, rebuilt on the same site where the original existed. Also at the beginning hikers will encounter imperial church of Santa Maria del Palacio, next to the hostel, built between the XII and XIII century in the place of another temple founded by the Order of the Holy Sepulchre. Its tower is known as "la aguja" (the needle) and has become one of the most famous architectural symbols of the city.

Following the shells painted on the ground the hikers reach, known San Gregory, one of the many underground cellars of the capital. In the historical area of Logroño there are still remains of ancient wine making infrastructure, in some cases restored and open to the public or, at least available for public functions and, in other cases still hidden under buildings. As a curiosity to note, in the sixteenth century the passing of carriages was prevented in the Calle Ruavieja so as not to disturb the precious wines that rested beneath.

After crossing calle Sagasta the route ends up in the square Plaza de la Oca, a place that invokes an esoteric relationship between the French Way and this popular game. In the square hikers will find a giant board of the game with dice included, although not for playing, in which the original reasons for it were replaced by the village that cross through the pilgrimage route. Some attribute the Templars to the invention of this "Camino de la Oca" (The game of the goose), supposedly it bears a relation to the Camino of Santiago.

The board is seen as an unwritten guide to the Jacobean route and its link to the Knights Templar. Those who believe this also find some parallels between the role of the Templars as sentry of saintly places and, the role of guardians formerly held by geese, unruly in the presence of strangers. Situated, to the left of the square is the Fuente del Peregrino (fountain of pilgrims) and, beside it the church of Santiago, with its baroque facade and the impetuous " Santiago Matamoros " on its portal.

History recalls how it was a disciple of the Apostle, Arcadio, who built the first temple in this place in honour of Santiago. The original church was subsequently extended and destroyed by a fire in 1500. The current temple was constructed just afterwards. Inside it has a unique nave and pilgrims can contemplate an altar with the image of the Apostle during the battle of Clavijo and an image of the Virgin of (Esperanza) Hope, patroness of Logroño. From the tower of Santiago, 40 meters in height, there are good views of the city.

In this temple they held Logroño council meetings and it was also used as a municipal archive. It can be visited from Monday to Sunday from 08.15 to 13.15 and from 18.30 to 20.00. From here pilgrims reach calle Barriocepo and, after the Plaza de Parlamento and observing the imposing Parliament of La Rioja (which occupies the ancient Convent of Merced) approach the Puerta del Revellín, formerly known as the Puerta del Camino (door of the Camino), named so because through this door pilgrims exit the ancient city.

From the XVI century it is crowned by the coat of arms of Charles V. A moat is crossed by bridge to continue on calle Once de junio, immediately afterwards, walkers arrive in Plaza Alférez Provisional, and reach the exit from the city. Other obligatory visits within the old town, although not on the pilgrim route, are the church of San Bartolomé (XII century), notable for the tympanum of its gothic portal and Arab style tower, the building Mercado de Abastos, built in 1929, and, especially, the Cathedral of Santa Maria de la Redonda (XVI -XVIII century), with its monumental doorway and its XVII century twin towers. Inside the choir area stands out and, in the ambulatory, a small picture of the crucifixion attributed to Miguel Angel.

It is possible to visit the temple on Mondays, from 10.00 to 11.00 and from 16.00 to 17.00 and on other days, from 09.00 to 13.00 and from 18.00 to 20.00. Visits to the wineries In Logrono and in the surrounding area there are several wineries that can be visited, with a prior booking. They include; Bodegas Campoviejo, Bodegas Darien, Bodegas Franco Españolas, Bodegas Marqués de Murrieta, Bodegas Marqués de Vargas, Bodegas Olarra, Bodegas Ontañón, and Bodegas Viña Ijalba.

A visit to the castle of Clavijo Although away from the route and 15 km from Logroño, a visit that many pilgrims have made ​​over the centuries is to the castle of Clavijo, a fortress and a place of great Jacobean symbolism. It was here that popular memory situates the battle of Clavijo, one of the most famous of the Reconquista, ordered by King Ramiro I of Asturias against Muslims. The origins of the confrontation can be found in the king's refusal to continue paying tribute to the emirs Arab, especially the shameful tribute of a hundred maidens, which were to be delivered annually to the emir of Cordoba under the arrangement of a peace pact.

Tradition supports the appearance in battle of Santiago on a white horse, in support of the Christian army, which is believed to have tipped the battle in favour of this side. In gratitude Ramiro I granted, on the 25th of May in the year 834 the Vote of Santiago, which obliged farmers in the country to pay a percentage of their earnings to the Cathedral of Santiago. This legend confirms the apostle as a symbol of the battle against Islam, which supports his image as Santiago Matamoros. In the village of Sorzano, near Clavijo, they celebrate, in May a procession of the hundred maidens, in which several young women, dressed in white and with bunches of holly, keep alive the memory of that tribute.

In Albelda de Iregua there existed for centuries the monastery of San Martín, where the first pilgrim to Santiago is documented by name. Known as Gondescalco, a French bishop who in the year 950, while on pilgrimage to Compostela, stopped at the monastery leave a copy of a book. This manuscript is now in the National Library in Paris.

Points of interest of Logroño (3) 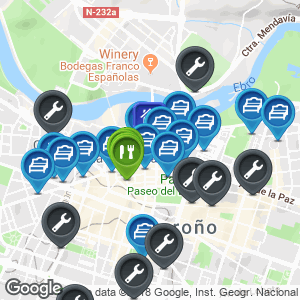