What to see in Los Arcos 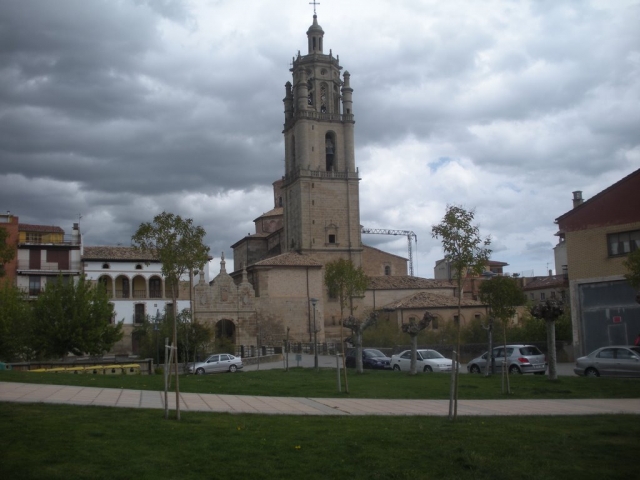 On arriving in Los Arcos pilgrims can appreciate the Hermitage of San Sebastián, which served as a chapel to the adjoining hospital Santa María de Roitegui, dedicated to serving pilgrims throughout the thirteenth century.

This was one of the three hospedajes (previously these were hospital that also provided accommodation to pilgrims, nowadays it is used to refer to a type of guesthouse) established in the middle Ages. The other two were Santa Brígida and San Lázarus, the latter is situated on the exit route.

The urban centre of ​​the enclave is medieval with vast, longitudinal streets that follow the course of the river. The Jacobean route enters the centre from its Calle Mayor, where hospitals and noble houses were once situated-nowadays they will find hostels and other services for walkers, sheer proof of the influence the Camino has had on this enclave.

After the first few steps on this path of noble houses, a junction with Calle Nicanor Pascual is reached, and a deviation that leads the travellers to Portal del Estanco, a relic from the ancient medieval walls that may date back to the XIII century. Its name derives from the fact that close to this monument there used to be a fish mongers, to which all the fresh fish that was delivered to the enclave was sent.

Continuing along Calle Guillermo Zubieta, parallel to the Calle Mayor (where the official route continues) they arrive to the Convento de las Madres Concepcionistas, the convent was originally a centre of studies and belonged to the order of Capuchins (a catholic religious order of friars) and is currently occupied by Franciscan nuns. The convent keeps beautiful works of art, including two baroque carvings.

Now back on the Calle Mayor the walker passes successive houses adorned by the coats of arms of the enclave. If they take, soon after, a deviation down the street Calle Fueros they will come to the 1764 town Hall, with the shield of the town, and a few meters later, Portal del Dinero (portal of Money), its name may derive from its location, close to the -Primicia Parroquial- the place where residents came to pay tax for the maintenance of the clergy.

On the nearby Calle del Medio one of the oldest hospices for pilgrims, with a carving of Santiago is situated. The official route now covers, the last stretch of Calle Mayor and after reaching the Square Plaza de la Fruta leads to the right to reach the most monumental area. Behind is the Calle San Anton, the old Jewish quarter.

From here they arrive to the Plaza de Santa María, the authentic heart of the town. On its southern flank is the main portico of the parish church, while at the remaining sides of the square there are seventeenth century buildings with porticos and arches. On the first floor a number of bars give life to the centre. The parish church of Santa María is the main artistic jewel of Los Arcos, a richly decorated monumental building, constructed and renovated between the XII and XVIII centuries and which contains compendiums of varied styles, from Romanesque and Gothic to plateresque, baroque and neoclassical. 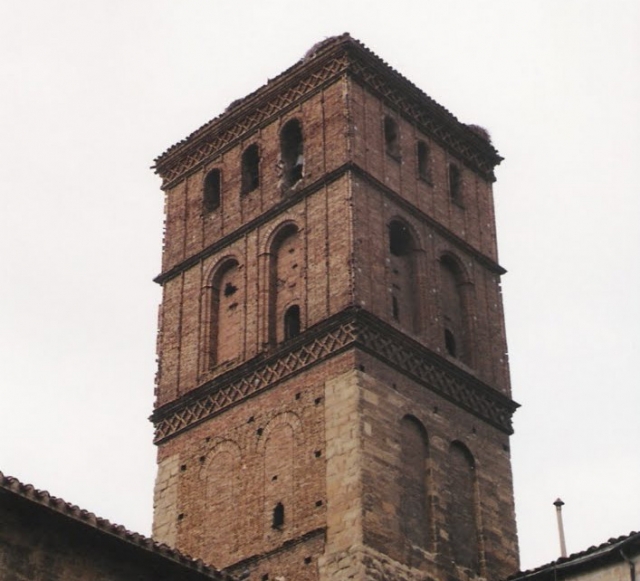 Its Plateresque portal from the XVI century is one of the best examples of Navarra Renaissance. If pilgrims visit the town between April 23rd and August 16th, and if the day is clear, they will see how the sunset lights up the face of the image of the Virgin, a peculiarity that has become known along the French Way and that walkers can also see in the Temple of San Juan de Ortega (in the province of Burgos).

In the church of Navarra the baroque XVII century altarpiece stands out- dominated by a figure of Santa Maria de los Arcos, its original black colour disappeared on its last restoration- not to mention the Plateresque choir stall, a late Gothic cloister decorated with plant and animal images and a beautiful organ from 1760, one of the most lavish in Navarre.

The Tourist Office organizes and gives guided tours of the Parish church of Santa María and the historic centre, by reservation only. It opens until late September from 12.00 to 14.00 and from 17.00 to 20.30. In winter it opens roughly half an hour before each mass.   After this visit the route passes under the Portal de Castilla (XVII century), which simulates a triumphal arch and encloses the Plaza of Santa María. It was the main entrance to the fortified town and for those inside, the way to Viana, from which Navarra is abandoned.

The Bridge, Puente del Lavadero, which gives access to the washing area, allows pilgrims cross the Odrón River, one of the rivers criticized by Aymeric Picaud in the Codex Calixtino.   In the village called Los Arcos there runs deadly water.   After the bridge the travellers approach the area of hostels and the centre Casa de Cultura Carmen Thyssen-Bornemisze

Founded in 2000 it hosts courses and exhibitions, some of great interest include the temporary exhibition of Carmen Cervera. The Baroness Thyssen and her relationship with Los Arcos, the home of her maternal grandparents and the place where she spent many of her summers as a child. On leaving Los Arcos, to the left the hermitage of San Blas is now visible, a former leper hospital for pilgrims. It retains its Romanesque apse and remains of medieval masonry.

From karting to winery visits In terms of luxury and relaxation, those pilgrims with free time in Los Arcos can go to municipal swimming pool . The more adventurous can visit the Circuito de Navarra de Velocidad, (a high speed race track) which has a karting circuit open to the public. There is also the option to visit one of the four wineries of the area.

In the surrounding area There are two recommended visits in the surroundings of Los Arcos. The first is to the Basilica of San Gregorio Ostiense, located 10 kilometres from the centre (ask at Tourist information for buses to the site), one of the most outstanding baroque monuments in Navarre. To visit, take the N-129 road and the turning for Sorlada. Surprisingly the temple is situated on a hill and it has a notable portal, with great ornamentation.

Erected in honour of San Gregorio, the Bishop of Ostia, possibly one of the first to embark on the pilgrimage to Santiago and whom ordained the priest Santo Domingo de la Calzada, the temple preserves a holy relic of the saint, his skull, the saint is strongly linked to a legend about a miracle water used to cure the fields of the area from the plague.

More distant, around 18 kilometres from the centre, lies the Sanctuary of Nuestra Señora de Codés, sheltered by the rugged mountains of Codés. It includes monuments of great beauty, such as a temple with a monumental baroque tower, a hostelry built in 1614 (now restored with accommodation, a bar and a restaurant) and the former Palace of the Bishop of Calahorra.

Points of interest of Los Arcos (1) 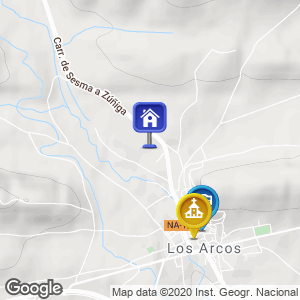