Crossing a wall during the Camino de Santiago now does not produce the same feeling as before. Centuries ago, crossing under these imposing gates meant that the pilgrim entered a territory safer than the roads. Now all the routes are more guarded, and the walls do not usually remain complete. This is the case of Los Arcos, an emblematic point of the Way, and of whose wall only a few doors remain.

The wall of Los Arcos

Along the perimeter of Los Arcos a wall was built in the 16th century, with Renaissance characteristics with Herrerian influence. The works lasted until the following century, so the style was turning towards the baroque aesthetic in some elements such as the Portal or Puerta de Castilla. Shortly after it had to be restored, in 1739, under the reign of Felipe V.

Most of this wall is not preserved, only a few gates near the Odrón river remain: the Estanco gate, the San José gate and the Puerta de Castilla gate. The historic center of the town still sticks to the perimeter delimited by the old wall.

The Gate of Castile

This entrance in the wall overlooks the Plaza de Santa María; in fact, it is attached to the bell tower of the Church of Santa María. This baroque door consists of a lowered semicircular arch, an upper body with three attics crowned with pinnacles.

The central space is the widest, it is topped by a triangular pediment that has the armorial bearings of Castile carved. It is flanked on each side by a curved pediment containing the carving of the Los Arcos armorial bearings. These three shields were sculpted in 1674 by Pedro López de Frías, and highlight the relationship of Los Arcos with the Habsburg monarchy.

The passage under this gate marks the end point of the stage that begins in Estella, and is in turn the starting point for the next one, which ends in Logroño. There are still more than 600 kilometers to reach Compostela, but the Romanesque architecture that we find in the Church of Santa María is one of the best examples of the art of the Camino.

The weather in Los Arcos 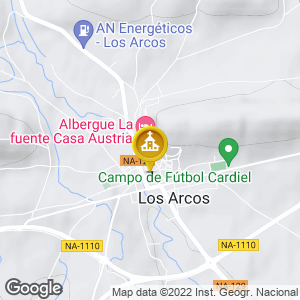