What to see in Astorga 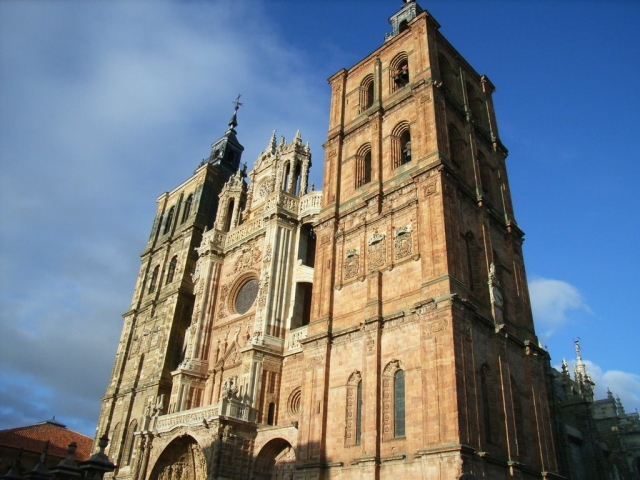 A meeting place of Culture, Astorga, through its own merits, has become one of the most popular pilgrim stops. Two millennia of history has allowed for an ample collection of monuments. Along the route, one of the first encountered by pilgrims is the Roman wall. Constructed in the first century, from the birth of this Roman city. In the centre part of its walls and three circular towers were built. Later in the second half of that century the enclave grew, which affected its defensive system and consequently in the third century a new wall, of approximately two kilometres was constructed.

After passing the wall along the Puerta Sol, the pilgrims leave, on the left, the old hospital of Cinco Llagas.   There were an important number of refuges for pilgrims in Astorga. During the Middle Ages it came to have 26 hostels, later, at the beginning of the XVI century many of them merged and only 14 remained. The figure reduced further in the XVIII century to four: San Juan, San Lazaro, Santo Tome and Cinco Llagas. This last refuge became a branch for other hospitals that were impoverished or about to disappear and, in order to survive chose to join together. The building, restored, can still be seen at present it is a social centre.

The walkers continue the urban itinerary along the street Padres Redentoristas and after reaching the Plaza de San Bartolomé they can visit the church of Bartolomé (the oldest temple of the city) and the Roman Museum (open from Monday to Saturday from 10.30 to 14.00 and, from 16.00 to 18.00 and on Sundays, from 10.30 to 14.00, entry tickets cost 3 euros. Tel: 98,761,937), here they can understand the importance of the former Asturica Augusta. The museum is situated in one of oldest buildings of Astorga where they still preserve an Ergastula, a narrow underground prison.

Except on Mondays and Sundays in the afternoon, this museum offers a daily, guided tour at 11.00 and at 17.00 hours known as Roman Route (Prior booking can me made by calling 987 616 937) the tour includes a visit to the thermal baths, the Roman Forum and a temple dedicated to the memory of the Emperor Augustus.

After this visit the walkers will access the bustling Plaza Mayor, which is notorious for its flaky pastry shops, diverse bars and a famous hotel. The square is also home to the beautiful and elegant baroque town hall. Built between 1683 and 1704, it has two towers and a steeple, adorned by shields and sculptures on its main facade. At the top there are two famous characters from Astorga, Juan Zancuda and Colasa, they mark the hours on a clock that functions using an original mechanism. The building also retains the famous banner of Clavijo, the historic flag that was waved in the fight against the Arabs. It was used on the 23rd of May in the year 844 by the royal ensign from Astorga Luis Osorez, during the battle that took place around Najera, on a hill called Clavijo between the troops of the Leones King Ramiro I and Abderrman II.

Legend recalls how the night before the battle, the king received a visit, in his dreams from the Apostle Santiago. The saint predicted that the soldiers of faith would be victorius. They were, the Asturian warriors killed 70,000 Saracens and created the legend of Santiago Matamoros. In memory of the epic monarch the Astorgan flag was donated to the city. In exchange Astorga created a special guard, the Zuiza, its mission was to honour and assist teaching through the annual anniversary of the battle. This tradition, lost in the XVIII century, was recovered a few years ago.

After continuing along Calle Pío Gullón the travellers will reach adjoining street of José María Goy, with a Chocolate Museum (open from Tuesday to Saturday from 10.30 to 14.00 and from 16.30 to 19.00 and, on Sundays from 10.30 to 14.00. Tickets cost 2.5 euros). The production of chocolate was one of the main industries in the region during the XVIII and XIX centuries. All this tradition is reflected in the museum where visitors can see lithographic pieces, gifts from the different factories and the entire process from handmade crafts to mechanization.   Back on the route walkers continue along the streets Postas and Santiago to access, at the end of the square Eduardo de Castro, where the information office and several of the most emblematic buildings are located.

On the right hand side the palace of Gaudí stands majestically (open Tuesday to Saturday from 10.00 to 14.00 and from 16.00 to 20.00 and, on Sundays from 10.00 to 14.00. Tickets cost 2.50 euros). A project undertaken by the great Catalan architect to create an episcopal palace, Gaudí started but the work but did not finish. The palace was originally created with the idea of ​​a castle, formed in the shape of a Latin cross, built using granite brought from Bierzo.

It never became seat of the Bishop and since 1963 it has housed the Museum of the Caminos, exhibiting various Jacobean motives, such as a collection of figures of Santiago the apostle, route information and the original Iron Cross, from the port of Foncebadón. A few meters away, one of the most disturbing places of the enclave can be found. Next to the church of Santa Marta, dedicated to the patron of the city, and the small chapel of San Esteban, from the XIV century, there is the Celda de las Emparedadas (The walled cell). It is a very small enclosure where women were locked up for life, through obligation or by personal choice, and in this prison they remained until their death, devoting their life to prayer and penance, it is not known if this was to show an excess of virtue or as punishment for an excess of vice.

On the outside there is just one narrow window with bars and the following inscription: "Memor esto juditti mei, sic enim tuum. Mihi heri et tibi hodie (Remember my condition, as this will be yours. Me yesterday, you today.) The passing pilgrims threw food to these women.   After a few meters the cathedral is reached, of late Gothic style (entrance to the temple is from Monday to Saturday from 09.00 to 10.30 hours and on Sundays and public holidays from 11.00 to 13.00). Construction began, as it is today, in 1471 on a site that was once preceded by other Romanesque cathedrals. Its twin towers, one of the bells and another older but restored offers the most representative image, with its characteristic red coloured stone. It was completed in the XVIII century. In its battlements there is an image of the apostle dressed as a pilgrim.

Attached to the cathedral is the Hospital of San Juan Bautista, founded by the Chapter of the cathedral in the XI century to assist the pilgrims. In 1756 it was burnt down and later reconstructed. Legend has it that it was here that San Francisco of Asís fell ill, on his journey to Santiago. It seems that when the regiment realized this they went back after the Saint and asked for a monastery to be established in the city. As was highlighted by the official chronicler of Astorga, Martin Martinez, "whether it is true or not, there is an undeniable fact. Years later the convent of San Francisco was founded in Astorga, situated at the entrance of the enclave on the Camino Frances, next to the Puerta Sol. "

Points of interest of Astorga (5)