What to see in Estella 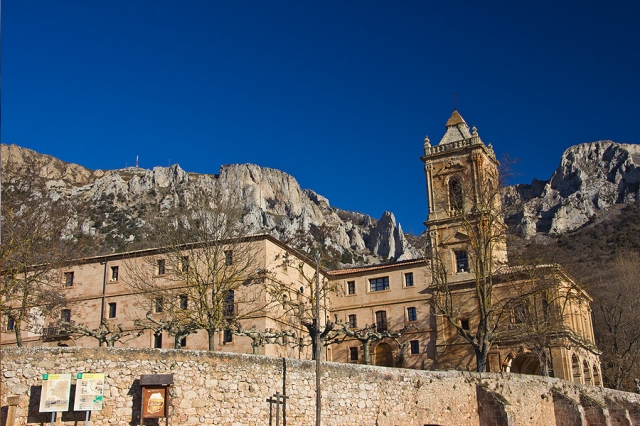 Along this urban Jacobean journey the walkers can appreciate the majority of monuments on offer in Estella. In the XII century, and as the consequence of an economic boom in the enclave and on the route itself, a number of religious buildings were constructed on both sides of its main street.

The route enters the town and leaves, on the left, the old walls of the enclave known as the new Jewish area. Upon entering Calle Curtidores, of medieval origin, and walking a few meters the route arrives at the Church Iglesia del Santo Sepulcro, its construction began in the late twelfth century and is notable for its XIV portal. Next to the church there is a figure of Santiago.

A few meters further to the right stands the bridge known as Puente de la cárcel (the prison bridge), built in 1973. The original bridge was destroyed, bombed by Liberals in 1973 in the 3rd Carlist War during which the city blocked.   The Carlist Wars involved three civilian battles that took place in Spain in the XIX century between the extreme Carlists, supporters to the throne of Carlos María Isidro of Borbón and his descendants-an alternative branch of the Bourbon dynasty-, and the liberal supporters of Isabel II of Spain. The Third Carlist War took place between 1872 and 1876.

Almost opposite the bridge, and through an underground tunnel, the pilgrims reach Calle Santa María from which they access the neighbourhood of Elgacena, where it is believed that the seat of old Jewish quarter was situated, the third most important in the ancient Kingdom of Navarre after the Jewish communities of Tudela and Pamplona. On the left is the impressive former convent of Santo Domingo, with its Gothic church founded by Theobald II in 1259.

Currently it is nursing home, closed to the public. A little higher is the church of Santa María de Jus del Castillo (named so for its location at the foot of the fortress of Belmecher), constructed in the late XII century on the site of an ancient synagogue. With a Roman apse and a Baroque facade, inside houses the current Centro de interpretación del Románico y del Camino de Santiago (centre of roman interpretation and of the Camino de Santiago), which, exhibits different artwork and models that help interpret these two important monuments from the middle Ages and discover the rich heritage of the ancient Kingdom of Navarra.

Now back on the official Jacobean way, along the ancient Rúa of the pilgrims, where they will find various Gothic arches that give access to shops and hostelries open at the foot of the Camino. A few metres away, and on the right, the former Governor's Palace is situated, inside the (constructed in the early XVII century) Museum of Carlismo, a premises which seeks to recover patrimonial, of research and scientific dissemination of this political movement (open Tuesday to Saturday from 10.00 to 14.00 and from 16.00 to 19.00 and on Sundays and public holidays from 11.00 to 14.00.

Entry is free for pilgrims with the credential). Passing, immediately after the Casa de Cultura Fray Diego de Estella, a plateresque palace built in the XVI century the authentic monumental centre is reached. On the right, in the square Plaza de San Martin, it has a beautiful fountain of jets (Fuente de los chorros), a pretty XVI century Renaissance fountain, popularly known as Fuente de Mona, and at one end of the square, the Palace of the Kings of Navarre, the only example of Romanesque civil architecture in this autonomous region.

On one of the capitals of the columns on the left side of the arcaded façade recalls the legendary battle that took place between the French knight Roland and the Islamic giant Ferragut (As told in the itinerary Logroño- Najera on the French Way). Today the palace is home to the museum Museo Gustavo de Maeztu, a legacy to plastic and graphic art from Estella.

In the vicinity of the square visitors will encounter the building that was the town council until the XIX century. Its Baroque façade includes classical columns and pilasters and, on its main floor, two shields of the city. Situated close by and reached from a steep staircase is the church of San Pedro de la Rúa, built in 1968, one of the most beautiful Romanesque monuments in Navarre. During the middle Ages, it was used as a cemetery for pilgrims.

Here a Greek bishop was buried in the XIII century, famous for carrying the relic of San Andrés he has been the patron of the city since its discovery. Among the most unique aspects of the temple are its tall defensive tower and beautiful late Romanic portal with an arch of Arab influence. It is also worth mentioning the star, symbol of the city. The most unique area of the temple is, however, the twelfth-century cloister, of which only two of the four galleries have been preserved after the destruction caused by the bombing of the ancient XVI century castle.

It is a square building of late Romanesque style. The decoration of its capitals combines iconography of the Camino of Santiago with other plant and animal themes. The cloister can also be accessed from an elevator located below on the street itself. If the Walker continues along the street Calle San Nicholas they will reach, a few meters later, the Puerta de Castilla (door of the castle), a unique portal situated at the foot of the medieval city walls, from here they will be outside the old medieval enclave.

But, despite not being on the road itself, Estella hides historic corners that are well worth visiting. Among them the beautiful old railway station of narrow gauge (Estella-Lizarra) stands out, located in the Plaza de la Coronación, completed in 1927, it remained in operation until 1967. Roman inspired, its windows are reminiscent of the Palace of the Kings of Navarre.

Currently it is the bus station. As a construct of interest, and related to the pilgrimage, the Basilica of Our Lady of Puy is notable, perched on a hill, from where the whole city can be seen. It was built where legend places the appearance of an image of the Virgin. First a chapel was erected, then a Baroque church and, in the XX century, a star-shaped basilica that recreates an intense light effect which allegedly, was produced on the discovery of the carving.

Tradition relates how in 1085, some shepherds, drawn in by a group of stars made their way to the top of this mound where they discovered, hidden in a cave, the image of the Virgin. It is likely that this Marian devotion attracted French pilgrims to Santiago, since in France it has a great devotion. It is also worth remembering that, from Le Puy, the Podense way, one of the most popular pilgrimage routes to Santiago traditionally popular in France begins.

In the summer, and for those pilgrims who arrive early to the city, a pleasant visit is to the park Los Llanos, bathed by the river Ega. Pilgrims can cool off in the pool known as the Agua Salada (salty water), a natural pool with medicinal properties located on one of the banks of the river.

Points of interest of Estella (7)