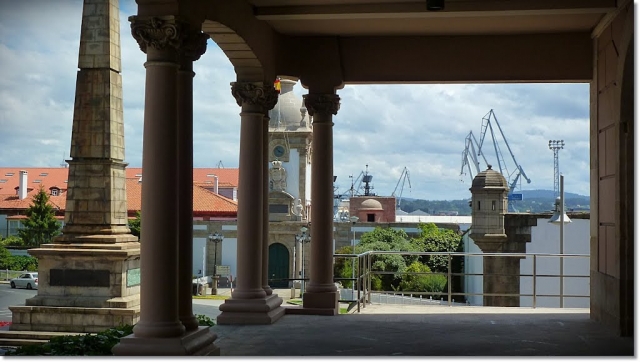 The link between Ferrol and the sea plays a huge role in many of the city attractions. Its origins are well anchored within the port area, where the Camino begins. Following this route, the neighbourhood of Ferrol Vello, next to the port and the doorway to the English Camino. From the sea front, the Church of Nuestra Señora del Socorro can be seen shinning in the distance. It is a small neoclassical temple dating from 1767, which contains within it two great carvings of great devotion to the city: the Cristo de los Navegantes (Christ of the Navigators) and the Virgen del Socorro. From here you will also see the bastion of San Xoán,   Bastion of San Xoán.

One of the most important remains of the city’s walls from the XVIII century. Opposite you find the Sala de Armas del Arsenal Militar (The Room of Military Arsenal Arms), one of the most emblematic buildings of the city and can be accessed via guided tours of the Ruta da Construcción Naval. The next temple that the walker encounters is San Francisco.

The construction, or at least remodification of the church, a former Franciscan convent, is attributed to Fernán Peres de Andrade "O Boo" in the XIV century, but according to the Ferrol-born historian and Montero Aróstegui, the origins of the old building trace back to when San Francisco embarked on the pilgrimage to Compostela. This is stipulated in the Bulletin of the Real Academia Galega, which claims that when the French invaded Ferrol, they respected the convent as specified in the surrender agreement of the city.

In 1757 the medieval church was replaced by an Enlightenment temple. Its layout as a Latin cross inscribed in a rectangle and with three naves separated by pillars. His altarpiece has images of Inmaculada, San Francisco and Santo Domingo, created in 1790 by the great sculptors José Ferreiro and Juan Antonio de Estivada.   The fountain of San Roque No less iconic is the fountain that you find in front of San Francisco: the fountain of San Roque. Showing the old shield of the city, on which appears a tower with a lantern, which explains the etymology, and incorrect but popularly widespread belief, that the place name Ferrol derives from “farol” (lantern).

Ferrol is well known for the layout of its streets in a grid like fashion. Towards which the path continues, on reaching the neighborhood of A Magdalena, an example of the Enlightenment period design, with its mathematical arrangement in the form of a chocolate bar, the checkerboard layout, is characterized by straight streets that cross at right angles.

Facade of Casa Romero, a jewel of Modernism Noted for its glass covered gallery front houses modernist style buildings by the council architect Rodolfo Ucha. The neighbourhood was declared an Historic Artistic Monument in 1983. In the same area you find the Teatro Jofre theater, opened in 1892, and the Puerta del Dique (Dock Gate).

Puerta del Dique (Dock Gate) The symbol of Ferrol and its formal portal from the XVIII century, designed by the military engineer Julián Sánchez Bort, also responsible for the layout of the main church of the town: the neoclassical Con-cathedral of St. Julián (San Xiao), patron of the city, whose two masonry towers form a pleasant profile. Still in Magdalena, visitors can see one of the most significant buildings for the pilgrimage, the Charity Hospital (Hospital de Caridad), currently Torrente Ballester cultural center, which was built in 1780 to provide care for the sick, the poor and pilgrims.

Guided tours Visits to Military Arsenal and the Fort of San Felipe, the latter at the mouth of the estuary, are top itineraries offered by tourism in the area. Including trips along the river, with a detailed onboard guided tour that explains the shipyards, military infrastructure and history of the city. The trips are usually available, on bank holidays and at peak seasons (Easter and Summer). While it is necessary to consult the tourist office for schedules and reservations.

The fort of San Felipe that flanks the mouth of the estuary Of great interest are also permanent samples of Exponav (National Exhibition of Naval Construction) and the Naval Museum, in the building of Herrerías (Irmandiños street), a walk along the history of shipbuilding and the evolution of nautical tools.

The venue was exile for almost a decade holding the equestrian statue of the dictator Franco, after removing it from the Plaza de España in 2002, until it was finally confined to a Navy ship.

The patron saint day of the city is the January 7, the day of San Xiao. Other local holiday is Easter Monday, that coincides with the pilgrimage to the shrine of the Virgen de Chamorro also known as Virgen del Nordés, a massive tradition of the area. But if there is an important event on Ferrol’s calendar, it is that of Easter. Declared of National Tourist Interest, and hoping to became of International Tourist Interest. The Passion is focused on eight days of processions, liturgical acts and traditional performances.

On Good Friday, the biggest day, sees the procession of Santo Encuentro, and on the same evening celebrate the silent procession of the Caladiños. In summer dates, the city hosts the traditional Trade Fair (Feria de Muestras), which has already served 50 years. It takes place on the first fifteen days of July in Punta Arnela. In August, the busy streets of the neighbourhood of Ferrol Vello recreate the Middle Ages with a craft fair, gastronomy and performances based on that area.

Doniños beach-A surfers paradise Furthermore, the beaches of Ferrol are an excellent summer attraction to pass the time along the coast. Cariño, San Xurxo, Doniños and Covas, are some of the most popular, although the coastline always full of surprises with the occasional hidden beach where you can make the most of the last rays of sun.

The summer festivities are msotly in the last week of August, ending with San Ramon, a fireworks display that lights up at night sky of A Malata and the port of Ferrol.   Representation of the Battle of Brión in San Felipe A popular recreation of the 1800s that re-enacts the people of Ferrol in a battle to prevent an invasion by the British as they advanced dangerously close to the city. A local victory that favored the interests of Napoleon, who famously toasted in Paris with the famous “por los valientes ferrolanos” ("To the brave people of Ferrol"). 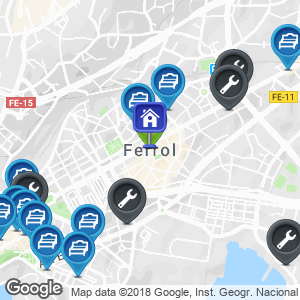