The rituals of pilgrims on the Camino de Santiago

Upon arriving in the city of Santiago de Compostela after a long journey, there are several very common rituals that pilgrims adopt to end their Camino. Do you know them all? 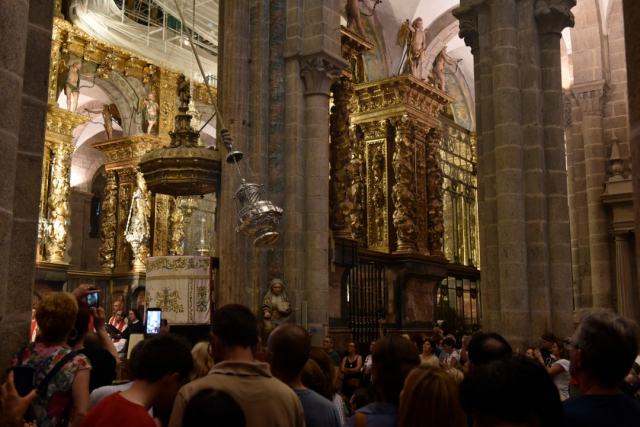 There is no greater satisfaction than the arrival in the beautiful city of Santiago de Compostela after a long journey, however, do you know the rituals of the Camino de Santiago that exist once we reach our destination? Thousands of pilgrims on the Camino de Santiago come each year to visit the Apostle Santiago, take the opportunity to see this beautiful city -declared a World Heritage Site- and enjoy its gastronomy, its historic center and the beautiful views.

Once the pilgrims arrive in Santiago after making the journey on foot, by bicycle or on horseback, and having successfully sealed their credentials along the Camino, they obtain the compostela when they arrive at the tomb of the Apostle Santiago.

Rituals in the Cathedral of Santiago

The pilgrims who are on the facade of the Plaza de Obradoiro, begin to enjoy a beautiful picture with a jewel of the Spanish Baroque at their feet. Going through the doors of this ancient temple, they enter the interior of the cathedral. The first thing you will find is the Portico of Glory, which represents the heavenly Jerusalem, a very relevant work in Spanish Romanesque sculpture.

In the past, pilgrims performed two rituals in the Pórtico de la Gloria, although they are currently prohibited. The first consisted of giving three small head butts against Santo dos Croques, who represents the Master Mateo, whose objective was the transmission of his wisdom and knowledge. Lastly, rest your hand on the mullion, which depicts the family tree of Christ and ends with the figure of the Apostle.

A very famous ritual that is still in force is the visit and embrace of the Apostle. Its 12th century polychrome image is found in the "old cathedral", passing through the main altar of the church. There are still some stairs that allow you to go up to the dressing room to be able to hug the effigy of the saint, after having meditated before him.

A relevant aspect that we must take into account when arriving at the last stage of the Camino de Santiago, is to make a planning to do it before 12:00, since that is when the Pilgrim's Mass is celebrated daily. It welcomes all the pilgrims who have arrived at the tomb of the Apostle Santiago, and a list of those who have arrived the day before is read. You can even see the botafumeiro in operation if there is a related party or if a pilgrimage group requests it.

Every July 25 the feast of the Apostle is celebrated, when the Jacobean Year happens. This tradition was imposed by Pope Callistus II in the 12th century, thus raising Santiago de Compostela to the height of Rome and Jerusalem, with whom he shared the date of celebration.

During this period, pilgrims access the interior of the cathedral through the Holy Door, which is only open during the jubilee. Once the door located in the Plaza de La Quintana is crossed, the pilgrims reach the redemption of sins. Bowing before the tomb of the Apostle Santiago they receive the plenary indulgence, finishing the rituals at the end of the Camino de Santiago.