We tell you how you can plan your way to Santiago from Bilbao, a municipality located in the north of Spain, its stages and why choose this route to make your way 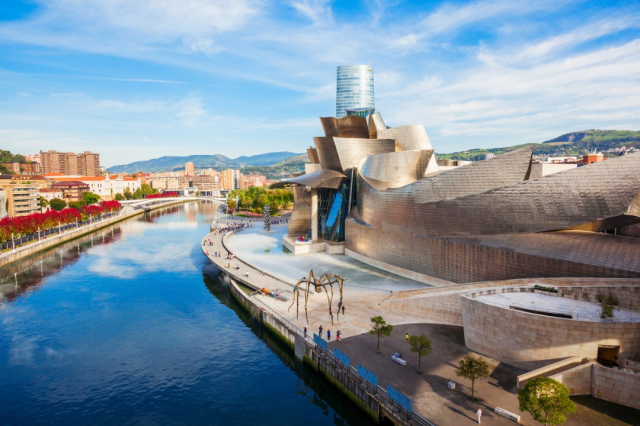 Why start the Camino del Norte from Bilbao?

Although there are many popular starting points that we can find on the Camino del Norte, such as Gijón or Santander, Bilbao is one that many pilgrims tend to choose. This point is in one of the main stages of this Jacobean route, so it will allow us to save time when traveling it but without missing everything that this route offers. Starting from this city, there are some of the most beautiful stages of the Camino del Norte according to the pilgrims, making it perfect to enjoy unique panoramic views.

A very important factor for which to choose Bilbao as a starting point is its accessibility, which allows us to reach this city quickly and by different routes from anywhere in the country. We must also bear in mind that Bilbao is the most populated city in the Basque Country and that there are emblematic places that we can visit before starting the journey. On one side is the Guggenheim Museum, a famous contemporary art museum, and on the other, the Seven Streets of the old town, which stands out for its original medieval layout, among many other points of interest.

What to take into account if we do the Camino de Santiago from Bilbao?

One of the most important things to keep in mind if we want to make the Camino de Santiago from Bilbao is the time we have. There are many kilometers that distance this city from the Galician capital, so we will have to have approximately a month to go through all the stages. Another option is to do the Camino del Norte in stages according to the free time that each one has, and thus not miss anything that this spectacular Jacobean route offers.

Another point to take into account when leaving Bilbao for the Camino de Santiago, is that this city is part of the Camino del Norte, one of the most beautiful routes but with more instability in the weather. If you want to avoid the rain and cold, it is best to choose the summer to make the way from Bilbao. In any case, the usual climate of this area of ​​the peninsula must be taken into account, so do not forget to wear the right clothing to do the Camino, especially due to rainfall.

The stages of the Camino del Norte from Bilbao

How to travel to Bilbao from the main Spanish cities?

This city of more than 300,000 inhabitants has a very good communication network with the rest of the cities. To get to this city you can travel by bus or car, like by train or plane.